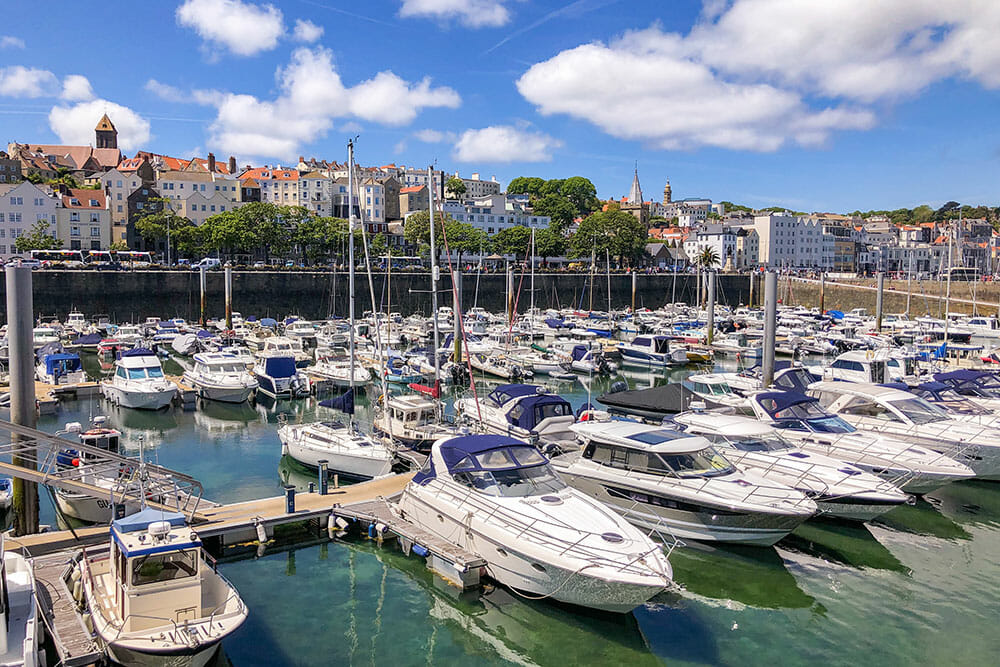 10 Adorable Things to Do in Guernsey, Channel Islands UK

St Peter Port in Guernsey was the last port of call on my cruise itinerary with Princess Cruises. It is an adorable little town with quite a few things to offer. But I also visited this charming island a few years ago, so whether you are visiting for a short break or as part of a cruise port day, here are my recommendations for the best things to do in Guernsey and, of course, in St Peter Port.

Disclosure: This trip was taken in partnership with Princess Cruises, who hosted me on this trip. As always, all views are my own. This post may contain affiliate links that earn me a small commission but come at no extra cost to you. This helps with the costs of running my blog so I can keep my content free for you. Thanks as always for your support!

Adorable things to do in St Peter Port, Guernsey

Get lost in the Old Quarter

If you are arriving by sea like I did, you will be arriving in St Peter Port, and you will most likely head towards the Old Quarter.

Connected to the harbour by narrow steps that are almost hidden, St Peter Port’s quaint narrow streets decorated with colourful buntin will make you feel welcome straight away. There is an eclectic mix of craft and antique shops, local restaurants and cute cafes.

On the edge of the Old Quarter you will also find the delightful Town Church of Guernsey, listed in the Guinness Book of Records as the closest church to a pub in Great Britain. There are 18 inches between them!

Every day at 12pm the Castle Cornet Noonday Gun is fired by the gunners who march out to music. If you find yourself near the Castle at noon, make sure you cover your ears!

Candie Gardens are an award-winning Victorian Garden that have spectacular views over St Peter Port harbour, and the islands of Herm, Sark and Jethou. The gardens have a rare example of a late 19thcentury public flower garden and the oldest known heated glass-houses in the British Isles, that date back to the 18thcentury.

Within the gardens there is also a museum, and art gallery and a cafe housed in a Victorian bandstand. Here you can also find a statue to Victor Hugo, who lived in Guernsey for during his exile.

After extensive renovation, Hauteville House has reopened its doors to the public. It was here that famous French writer Victor Hugo lived during his 14 years of exile in the island.

Many of his masterpieces were written here, including Les Misérables, The Legend of the Ages and The Man Who Laughs. The house itself is a bit of a work of art too, having been designed and decorated by Victor Hugo himself.

Guernsey Museum includes permanent exhibitions displaying the archaeology of Guernsey, treasures from around the world and the folklore of Guernsey. There is also an art gallery with more than 200 works of art that are shown alongside with temporary exhibitions that change throughout the year.

Make sure you stop by at the cafe for a light snack and to enjoy the lovely views over St Peter Port harbour.

It is located within a set of underground tunnels built by the Germans forces as a fuel storage facility for their U-Boats in the 1940s. It displays a variety of military memorabilia and information about the Occupation.

I visited St Peter Port as part of a shore day on a 7-day cruise with Princess Cruises, departing from Southampton and stopping at A Coruña, Bilbao, Bordeaux and Guernsey.
Find similar cruises here

Adorable things to do in Guernsey beyond St Peter Port

Nestled in a beautiful valley in the parish of St Andrew, the Little Chapel is a popular visitor attraction in Guernsey. It was built by Brother Déodat who started this work of art in 1914, and what we see today is the third version of this building. He wanted to create a miniature version of the famous grotto and basilica at Lourdes in France.

It truly lives up to its name – it’s thought to be the smallest consecrated church in the world. But little as it may be, it is pretty special, with both its exterior and interior decorated with shell, stained glass and broken china.

The walk from St Peter Port to Fermain Bay along the cliff path is an easy route to follow. It takes about an hour and it offers wonderful views over to the islands of Herm and Sark.

The walk starts in St Peter Port and heads towards the La Vallete Underground Military Museum, past the bathing pools. Take the steps up to Clarence Battery, an 18thcentury military fortification. From there you’ll enjoy a superb view over St Peter Port.

Follow the footpath signs for Fermain Bay and you will come across some steps that will lead you to the bottom of the cliff. Apparently in the middle of nowhere, Ozanne steps were built to give access to a family living in a property above.

When you reach Fermain Bay, stop at Fermain Beach Café for a drink or for one of its famous local crab sandwiches.

Sausmarez Manor is Guernsey’s only stately home open to the public. It’s been owned and lived in by the same family for over 800 years. Its façade was built by Sir Edmund Andros, the 1stGovernor of New York, and it is considered to be the finest example of Queen Anne Colonial architecture in Britain.

The Manor displays artifacts and art related to members of the family that were Inventors, Soldiers, Sailors, Explorers and various other occupations.

Island Hopping to Sark and Herm

You can escape the hustle and bustle of St Peter Port by jumping on a ferry to Sark or Herm. Visiting either island is very straightforward and easy to do in one day.

Sark is a car free island that can easily be explored by bike, which you can hire on arrival. Make sure you don’t miss crossing the Le Coupée, a narrow isthmus that connects Sark to Little Sark. If you want to treat yourself, the award-winning La Sablonnerie restaurant serves delicious locally caught lobster.

The Sark Shipping Company has boats leaving at 10am and returning at 5pm most days, but this may change depending on the time of the year. Always check timetables in advance.

Herm is so small that you can walk around it all in one day. Shell Beach is so beautifully pristine that you will feel like you are in the Caribbean. Travel Trident have a number of sailings a day to Herm. Check timetables here.

I visited St Peter Port as part of a shore day on a 7-day cruise with Princess Cruises, departing from Southampton and stopping at A Coruña, Bilbao, Bordeaux and Guernsey.
Find similar cruises here

If you prefer to explore St Peter Port and Guernsey on a tour, here are a few examples of the tours offered on my Princess Cruises cruise. Some tours are extremely popular, so one of my tips for first time cruisers is to book tours in advance.

This tour explores the dramatic western coast of the island, going through scenic villages and stone-built farmhouses. It includes a visit to the Little Chapel and Sausmarez Manor.

Following the steps of the characters of The Guernsey Literary and Potato Peel Pie Society book and film, this tour combines fact and fiction of the island’s German Occupation during World War II. It also includes a visit to the Little Chapel.

On this tour you travel to the Isle of Herm by ferry and take part on a guided walk to Manor Village, enjoying views over the fields and the pristine beach below, and back to Harbour Village.

Explore the island on a guided bicycle tour, starting from the west coast bay of Perelle and travelling through the area of Catioroc and the protected areas of Shingle banks, Lihou Islands and the Colin Best nature reserve. On the way back you can stop to visit the dolmen Creux ès Faies, a Megalithic passage tomb.

CRUISE DETAILS
My 7-day Spain and France cruise with Princess Cruises starts from £649pp for an interior stateroom based on twin-share. Stopping at A Coruña and Bilbao in Spain, Bourdeaux (Le Verdon) in France and St Peter Port in Guernsey, Channel Islands in the UK. It’s a great way to visit a lot of destinations in one trip and get a taste for them.
MORE DETAILS AND PRICES HERE

Do you have any questions about things to do in Guernsey or shore excursions with Princess Cruises?
Let me know in the comments!

Check out my other articles about cruising

Cruising Spain, France and the Channel Islands with Princess Cruises