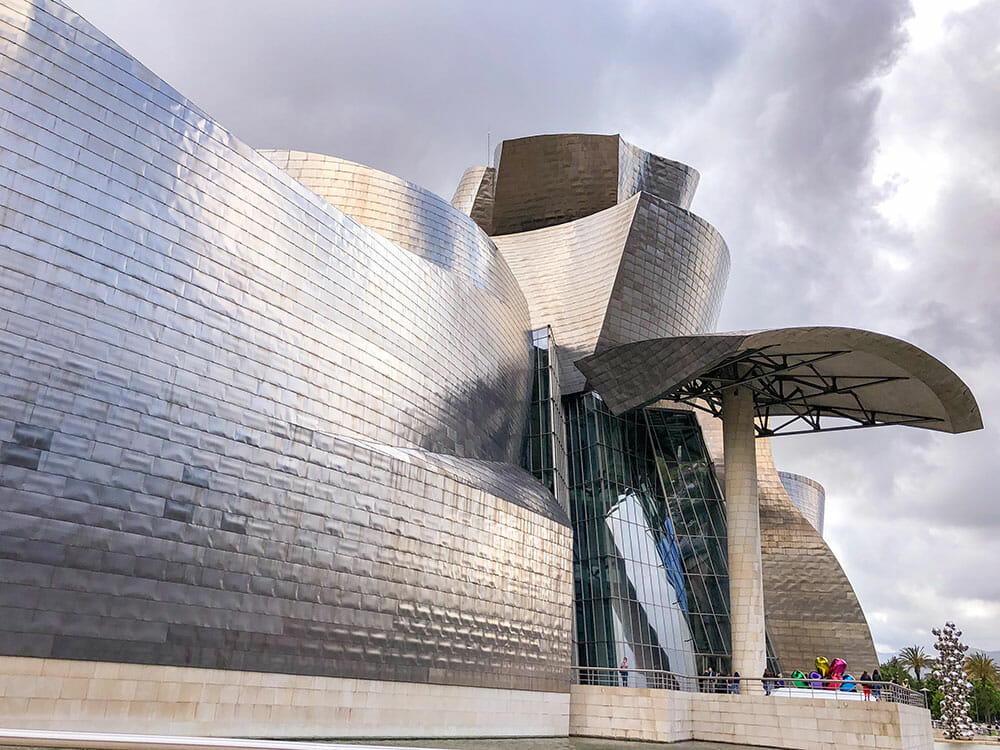 The Perfect Itinerary for One Day in Bilbao, Spain

I have been to Bilbao before and I loved it. But that was many years ago, so I was really happy to find out that my Princess Cruises itinerary included a port day in this former industrial and now uber cool city. I only had one day in Bilbao, but I managed to make the most of it, and got to see some interesting art, eat some mouthwatering pintxos, get a feel for a Basque fishing village and visit a spectacular Game of Thrones filming location. It was my favourite shore day of the whole trip.

This post may contain affiliate links that earn me a small commission but come at no extra cost to you.

One Day in Bilbao – Itinerary

Bilbao is located on the shores of a very narrow estuary, about 10 miles south of the Bay of Biscay. As we arrived by cruise, the ship docked in the neighbouring port of Getxo in the mouth of the estuary. So instead of heading straight to the city, we decided to explore a couple of places in the surrounding area first. This is what you could also do if you only have one day in Bilbao.

Ring the bell of Gaztelugatxe (aka Dragonstone)

About an hour’s drive along the coast from Getxo port, we find the magical islet of Gaztelugatxe, also known as Dragonstone, the ancestral home of the Mother of Dragons, Daenerys Targaryen in Game of Thrones.

Gaztelugatxe means ‘castle rock’, but you will only find a little church on top of this cone shaped outcrop. The church is dedicated to St John Baptist (San Juan Bautista) and it originates back to the 10thcentury, although nothing remains of the original church.

San Juan de Gaztelugatxe holds a lot of history. Due to its strategic location, it has been attacked numerous times throughout the centuries. In the 16thcentury it was pillaged by Francis Drake and his army of privateers and during the Spanish Civil War it was the site of the infamous Battle of Cape Matxitxako.

Joined to the main land by a man made bridge, this little island is a place of pilgrimage for the nearby fishing town of Bermeo. Once a year in June the local fishermen make their way to the shrine to pray that they survive another year of storms at sea.

To reach the top of Gaztelugatxe, there are two walking routes. From the car park it is about 1.5km down hill on a steep and uneven terrain and then up 241 steps to the top of the rock where the church is. It’s a demanding walk, both down and up, and then back, but it’s really worth it. And when you arrive, don’t forget to ring the church bell and make a wish!

I visited Gaztelugatxe and Bilbao as part of a shore excursion on a 7-day cruise with Princess Cruises, departing from Southampton and stopping at A Coruña, Bilbao, Bordeaux and Guernsey.
Find similar cruises here

One of the most important fishing villages in the Basque Country, Bermeo is located within the Urdaibai Biosphere Reserve, less than 10km from Gaztelugatxe.

Bermeo has a long seafaring tradition and has one of the largest fishing fleets in Europe. As you walk around the Old Town you can feel that distinctive sea town atmosphere where the sea rules the local’s way of life.

Bermeo was founded in the 12thcentury and it was the capital of Biscay between 1476 and 1602, when an epidemic struck and the capital was moved to Bilbao. For centuries, Bermeo was famous for its whaling industry and the local whalers (beremotarras) were known worldwide.

The colourful houses around the Old Port were painted to match the colour of the owner’s boat, so it could be identified from the sea. But also, rumour has it, so that fishermen were able to get back home to the right house after a few drinks at the bar!

Enjoy a pintxo and a drink by the port and soak up this unassuming town’s down to earth atmosphere.

Eat all the pintxos in Bilbao

After a morning exploring the surroundings of Bilbao, we made our way to the city for lunch. And lunch in the Basque Country can only mean one thing – pintxos!

Walking through Bilbao Old Town there are plenty of opportunities to stop for pintxos. The way locals do it, is go for an appetitive before going home for lunch, and with their drink they will get a pintxo or two to whet their appetite.

A pintxo is a small snack that you normally have in bars in Northern Spain, particularly in the Basque Country. Some would say that they are the Basque version of tapas. They are called pintxos because traditionally they come with a pintxo, a toothpick or skewer that holds food onto a piece of bread to keep it together.

You can either have one or two before having a proper lunch, which is the main meal of the day in Spain, or you can have a selection of pintxos and make a meal out of them. This is exactly what we did, and I loved that this way you get to try lots of different kinds. I had brie and quince jelly, baby squid on piquillo peppers, calamari, anchovies and green peppers, and iberico ham.

Visit the Guggenheim and Puppy

If you only have one day in Bilbao or even just a couple of hours, the one thing you must do is visit the Guggenheim Museum. Whether you are art lover or not, make sure you don’t miss out on this architectural marvel and what holds within.

The Guggenheim Museum was designed by famous architect Frank Gehry and its organic shapes are truly breathtaking. Covered with over 33,000 sheets of titanium, more thank a building it looks like a giant sculpture. It was built in the location of a former industrial wharf, after the metal industry collapsed in the city. It opened its doors in 1997, when Bilbao had a 48% unemployment rate, and the redevelopment of the area and the resurgence of Bilbao’s economy has been greatly attributed to the museum. It is one of Spain’s most visited museums and it attracts 1.6 million visitors a year.

You could easily spend a whole day within the building and still not see every art installation. But there are a few that you must not miss. Jeff Koon’s Puppy, which sits at the front by the main entrance. Puppy gets a new coat twice a year. If you are lucky to be in Bilbao in May or October, the plants that make up this sculpture get replaced by seasonal flowering plants so Puppy gets colourful. Jeff Koon’s Tulips, a hyperrealist metal sculpture recreating colourful balloons in the shape of tulips. And finally, Louise Bourgeois’ famous spider sculpture, Maman (mummy).

So, was one day in Bilbao enough? No, definitely not. Bilbao has a lot of to offer. But what I loved about cruising is that you get a taste for a destination and I now know that I want to come back to Bilbao for more. It has changed so much since my first visit all those years ago!

I visited Gaztelugatxe and Bilbao as part of a shore excursion on a 7-day cruise with Princess Cruises, departing from Southampton and stopping off at A Coruña, Bilbao, Bordeaux and Guernsey.
Find similar cruises here

Do you have any questions about shore excursions with Princess Cruises?
Let me know in the comments!

Visiting Spain? Check out my other Spain articles

Check out my other articles about cruising

Disclosure: This trip was taken in partnership with Princess Cruises, who hosted me on this trip. As always, all views are my own.

The Perfect Itinerary For a Road Trip in Tenerife

Cruising Spain, France and the Channel Islands with Princess Cruises

Things To Do In A Coruña, Spain – The Perfect One Day Itinerary