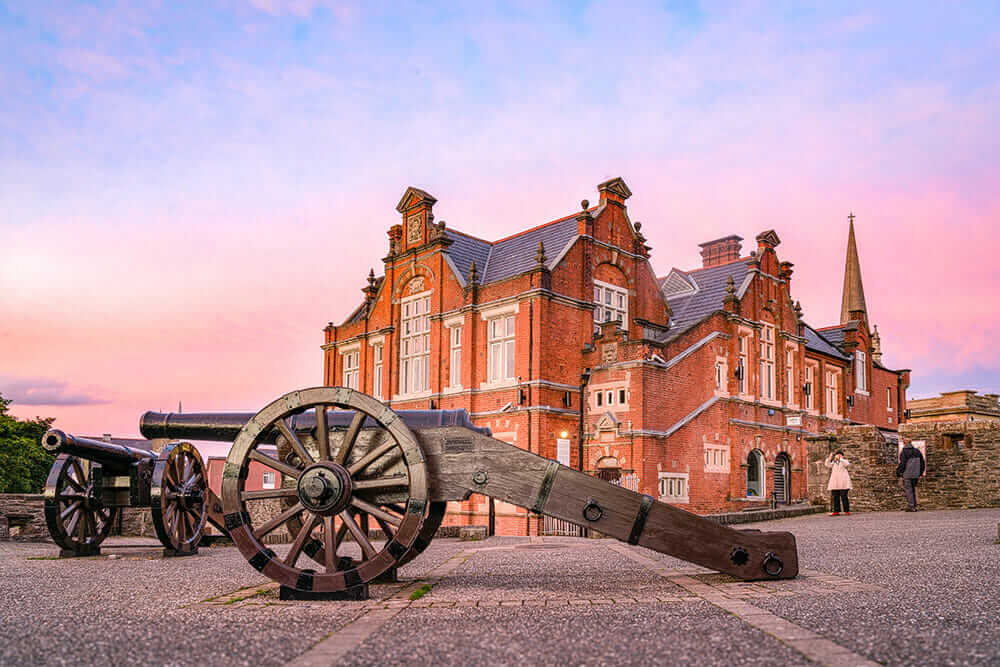 There is something about Derry (also known as Londonderry) that keeps me going back. Maybe being so close to the Republic of Ireland’s border and having a recent troubled past gives it a bit of an edge, or maybe it’s the fact that it’s totally underrated and sometimes overlooked by visitors to the Emerald Isle. There is definitely something special about the Walled City, so I’ve been giving it some thought and I’ve come up with a few reasons why everyone should include Derry in their Northern Ireland itinerary.

Reasons to include Derry in your Northern Ireland itinerary

Derry is one of the finest Walled Cities in Europe

Derry is the only remaining completely walled city in Ireland, and it is these Walls that are the city’s most famous attraction. They were built in the 17thcentury as a defence structure by the Irish Society for the English and Scottish settlers. You can imagine that these Walls hide an incredible amount of history. Today you can imagine and relive a little bit of that history by following the walkway that the Walls form around the inner city. Garvin from City Tours is the best guide to bring the Walls and the history of the city to life.

You will come across plenty of points of interest along the City Walls, including the cannons that were actually used in the famous Siege of Derry. Also, the promenade offers the best views of the original town and over the Bogside, outside of the City Walls.

Derry is a sustainable foodie destination

Believe it or not, Derry is one of the best places to visit in Northern Ireland if you are a foodie. I discovered this on my previous visit and it was a bit of a revelation. Something that I loved was that local restaurants put a lot of emphasis in the quality of the ingredients used in their dishes. But not only that, there was a consistent focus on sourcing local ingredients as much as possible. Some of the menus even gave details of what farm the meat and vegetables where coming from – something that every restaurant should aim for, in my opinion.

Some of my favourite restaurants in Derry are Walled City Brewery and Brickworks for great food and a relaxed atmosphere, and Browns for more of a fine dining experience.

Derry has Northern Ireland’s Authentic Experience of the Year

For decades Derry was at the centre of the conflict known as The Troubles. The city has come a long way since then, and part of the healing process was to set up the Museum of Free Derry. This museum is a must visit in the city, with its poignant exhibitions of Derry’s recent past. It tells the story of what happened in the city during the period of 1968-1972, popularly known as ‘Free Derry’, and it includes the civil rights era, Battle of the Bogside and Bloody Sunday. It is by no means a political museum, but rather an educational project that very successfully puts Derry into a wider Irish and international context.

During the Troubles, there was one particular event that marked the city. In 1972 Bloody Sunday took place, when British soldiers shot 28 civilians during a peaceful civil rights march. These events have been depicted on a total of twelve large-scale murals along the entire length of Rossville Street, in the Bogside. The murals were painted by the Bogside Artists, a group of three local mural painters. They called this collection of murals The People’s Gallery.

As well as illustrating the history of thirty years of conflict, The People’s Gallery also includes work that demonstrates how far the communities in Derry have come to build bridges. There is certainly an air of optimism about the future in the city.

The best way to explore The People’s Gallery and learn about the events and people represented on each of the murals is by taking a walking tour of the Bogside.

Derry is the perfect base to explore Northern Ireland

With a great choice of accommodation and plenty of things to do, Derry is the ideal base to explore Northern Ireland. It is only a drive away from popular sites such as the Giant’s Causeway, the Dark Hedges and Carrick-a-Rede, and Belfast is only one and half hours away. But there are also plenty of options for day trips that are right in the city’s doorstep. One thing is for sure, you will not run out of places to go in Northern Ireland from Derry.

Derry is also the ideal point to start a Northern Ireland road trip that includes the spectacular Causeway Coastal Route.

For the best car hire deals, I use the Travel Supermarket and Auto Europe comparison sites.

And to explore the north of the Republic too

If you have seen enough on your itinerary of Northern Ireland (is that even possible?), Derry offers the option to also explore a bit of Ireland. Derry is located right by the border with Donegal, so there are plenty of day trips that you can do there too. From the Walled City you can easily reach Glenveagh National Park, with its castle, lough, and cycling and walking trails. You can also visit places like Dunfanaghy, ideal for horse riding on the beach, and even Ardara and its beautiful surroundings.

One highlight less than an hour away is Malin Head, a truly breathtaking headland and the filming location of Star Wars Episode VIII. Malin Head is also the southbound starting point of the famous Wild Atlantic Way, so why not spend some time in Derry before setting off?

Derry is the Halloween Capital of the World

Yes, you read that right. Halloween in Derry is a pretty big deal, and the world is now cottoning on to it. So don’t be left out.

Halloween is thought to originate from the ancient Gaelic festival of Samhain, when according to tradition, the spirits of the dead came back to walk the earth before the new Celtic year began on 1stNovember. Fast-forward over 2,000 years and Derry has become the centre of Halloween celebrations. This is where the City Walls come to life with the Awakening of the Walls, a trail that follows the wall with supernatural installations and performances. There are magic drummers that appear out of nowhere and entrance their audience, and the Return of the Ancients parade that snakes through the city. And absolutely everyone in Derry gets involved and dressed up – from the youngest to the oldest in every family.

It is for a reason that USA Today voted Derry the Best Halloween Destination in the World.

You can fly direct from London* (Updated Feb 2019)

As of February 2019 Flybmi has sadly ceased trading, but Derry is still very easy to access from other airports such as George Best Belfast City Airport, Belfast International Airport, and even from Donegal Airport, which has been voted as the most scenic landing in the world.

Where to stay in Derry

Located within the historic city walls in the heart of Derry City’s Cathedral Quarter, this hotel is ideal to explore Derry’s iconic tourist landmarks. These include the historic walls, The Guildhall, the Bogside and the Peace Bridge.

This 4-star hotel is located within Derry’s historic city walls, and offers a luxurious stay and easy access to the city’s theatres, restaurants and shops. Some rooms have views of the River Foyle and the 400-year-old city walls.

On the banks of the River Foyle, City Hotel is just 550 yards from the Tower Museum. The famous golf courses at Portrush are less than an hour’s drive away, and Foyleside Shopping Centre is within a 10-minute walk.

Do you have any questions about Derry?
Ask me below!

Disclosure: A big thank you to Visit Derry, Tourism Ireland and flybmi (no longer trading) who hosted me on this trip. As always, all views are my own. This post may contain affiliate links, that earn me a small commission but come at no extra cost to you. Thanks as always for your support!

Summer in Trentino – Adventure Activities you Must Not Miss

Halloween in Derry, Northern Ireland – The Best Halloween Destination in the World?