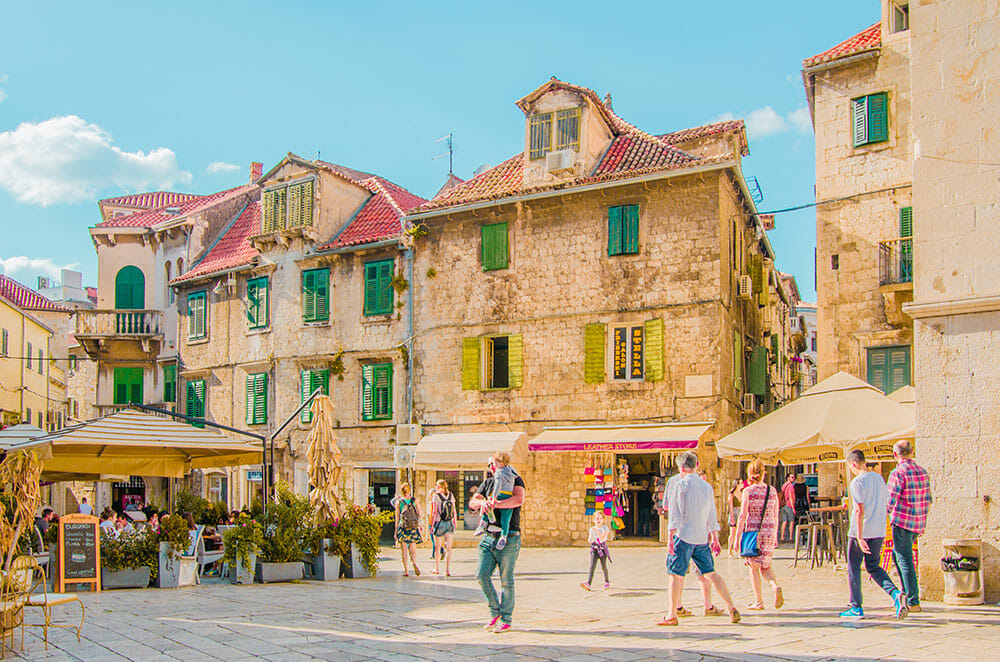 Is One Day in Split, Croatia Enough? Here’s Where to Go

One of the most popular destinations in Croatia, there are plenty of things to do in Split, and it makes for a great starting point or a base to explore the region. But if you are short on time, you might rightly ask the question if one day in Split is enough. It will definitely provide a great overview and to help you out further, here is an example of a Split itinerary for a day trip.

How to get there and around

You could rent a car and drive to Split. Since it’s one of the bigger cities, you will easily find signs leading you to it. From Zadar, for example, it takes less than two hours. With a local inter city bus, it’s a little more than two hours but super affordable with tickets costing between $8-$20. Check CroatiaBus or Flixbus for best rates. Trains also operate but take way too long.

As with all getaways to Croatian shorelines, you need to pack sunglasses, sun lotion and a sun hat to properly protect your skin and hair in style. Also, it’s part of the Croatian Riviera chic. If you are keen to hike the surrounding hills, wear comfortable walking shoes, preferably close-toed. For extensive beach time, don’t forget your fluffy towel, beach tote, beach volleyball and your kindle to catch up on your reading list.

Where to stay (area) with recommended hotels

If you appreciate cute little BnBs with outstanding local hospitality and great location, make yourself comfortable at the Guest House Villa Galla. The charming rooms don’t come with budget prices but Booking.com often offers special deals with up to 50% off! So you might want to check current rates in advance here.

A bit more low key but very stylish still, get yourself your own apartment with family-run Split Inn Apartments. This way, you can cater for yourself or dine in. You are only 500m away from Split’s city centre, which is nothing.

For a classy high end stay in Split, check out the Jupiter Luxury Hotel with its exciting blend of historical building and modern, sleek design. Plus, from the rooms, you have a great view over Split’s Old Town.

Split enjoys mild Mediterranean weather thanks to its coastal location. Expect summers to be nicely warm and winters to be mild. July is the hottest month with temperatures around 25°C (77°F). January gets the most sunshine, however, despite being the coldest month with an average temperature of 7°C (45°F).

One day in Split Itinerary

If the weather is pleasant during your one day in Split, you might as well jump into the warm Mediterranean Sea. Split has its own sandy beach called Bacvice Beach. The water is shallow, so if you want to really swim instead of just idly floating, you have to wade out a bit. Just know that during peak season, Bacvice Beach can be rather crowded, so you need to visit early.

In case you’re travelling in peak season, it might be a good idea to redirect to alternative beaches. Luckily, Split has quite a few. Three possible options are Kasjuni Beach, Žnjan City Beach and Firule Beach.

It’s time to learn a bit more about Split’s history and culture. Why not start in ancient times with the Old Romans? For instance at the Live Museum Split, you can have a really immersive experience, watch daily Roman life unfold, interact with Roman citizens and try your hand at archery.

Are you an art lover? Then you should include the Ivan Meštrović Gallery in your Split itinerary. The entire art museum is dedicated to the Croatian sculptor Ivan Meštrović, featuring plaster models as well as finished pieces in bronze, marble and wood. The building was conceived by the artist as well.

For more history, step into the Museum of Croatian Archaeological Monuments, which features weapons, jewels, monuments and relics up until the Middle Ages. Then, there is the Split City Museum displaying art, weapons and armor as well as Split Science Museum in which you can discover more about traditional Dalmatian culture. There are a few more museums in Split. In essence, there are plenty of things to do in Split in one day.

Being by the seaside, look out for fresh catch of the day, crab dishes or the typical Dalmatian seafood cuisine. Dishes you ought to try in Split are black risotto, which is coloured with squid ink, dirty makaruni, a yummy beef and pasta dish, as well as fresh oysters.

Some of the best restaurants to eat at in Split are Apetit (try the fish and gnocchi), Restaurant Dvor (for charcoal grilled fish) and restaurant FIFE (authentic décor and traditional cuisine).

It isn’t only Split’s waterfront and beaches that are outstanding but its old historic centre. Walk the cobblestone streets and marvel at the wonderful old building. A big bonus is that you will find pleasant shade from the hot midday sun.

Split is full of beautiful alleys and squares but one of the most renowned is the Republic Square. The Prokurativa faces the ocean and was built in a Neo Renaissance style. If you visit in the warmer months, you might be in luck. There are plenty of events and concerts happening, such as Splitski Festival or Ultra Europe.

To marvel at a huge palace and fortress of a former Roman emperor, check out Diocletian’s Palace. This is where Roman Emperor Diocletian lived at the turn of the 4th century AD.

It might be an awe-inspiring historical building from the 4th century, but the Cathedral of Saint Domnius is still in use. To this day, it holds the seat of the Archdiocese of Split-Makarska. If you’re asking your way to the cathedral, refer to it in the local way as Sveti Dujam or Sveti Duje.

Don’t forget to include both the Iron and the Golden Gate in your walk, as it is a Split landmark. It was erected in the 4th century CE and used to be the entryway to Diocletian’s Palace. Other important buildings are the Old Town Hall (now a museum) and Saint Domnius Bell Tower.

In case you haven’t gotten your fix for art and culture yet, I recommend a visit to the Gallery of Fine Arts in Split. It is situated in a former hospital and features both Croatian and European works dating from the 14th century up until today.

Are you a Game of Thrones fan? Many tourists are flocking to Dubrovnik for a day trip for that but the Fortress of Klis served as a filming location as well! The ancient fortress was built in the 3rd century BC and is truly stunning.

What better way to fuel up again and recharge your energies than by sitting in a seaside cafeteria or bar and sipping a cool cocktail? Beer and wine as well as rakija are particularly popular in Croatia. For nonalcoholic options, try the fresh juices. Local restaurants come with tourist prices. If you are travelling Split on a budget, get your drinks at an Interspar or Kaufland. Just don’t drink them on the streets, as that is finable.

Riva, a Split waterfront is an iconic place and a favorite meeting point – the best place to see the best of Split and to be seen. Everything is going on here from summer or New Eve celebrations and local events. Naturally, it is a great place to both enjoy a drink and people watch.

Make your way towards Marjan Hill Park in time to catch the sunset over the Adriatic Sea. Marjan Hill is the absolute best spot for this and there are a few options for panoramic views. For a nice foreground, try standing at the ruins of the church of St. Benedict. Alternatively, you can pick one of the many chapels in the park, like Sv. Jure or Karepića kula. You could also just chill by the sandy Kasjuni Beach.

After a long day, your feet will probably be in dire need of relaxation. Good thing that Split also offers massage opportunities. Book an appointment at the Mediteraneum Massage & Fish Spa for instance. (They close at 9PM.) This way you can have tiny fish nibble the skin at your feet soft again and you can get a thorough kneading of your muscles after.

If you have more thank one day in Split, visiting Krka National Park can make for a great day trip.

Do you have any other suggestions for spending one day in Split?
Let me know in the comments.

Annemarie Strehl is a freelance videographer and travel blogger capturing the world’s quirkiest places and amazing off the beaten path solo travel destinations on her channels. Check out her blog www.travelonthebrain.net for travel tips on the Balkans.